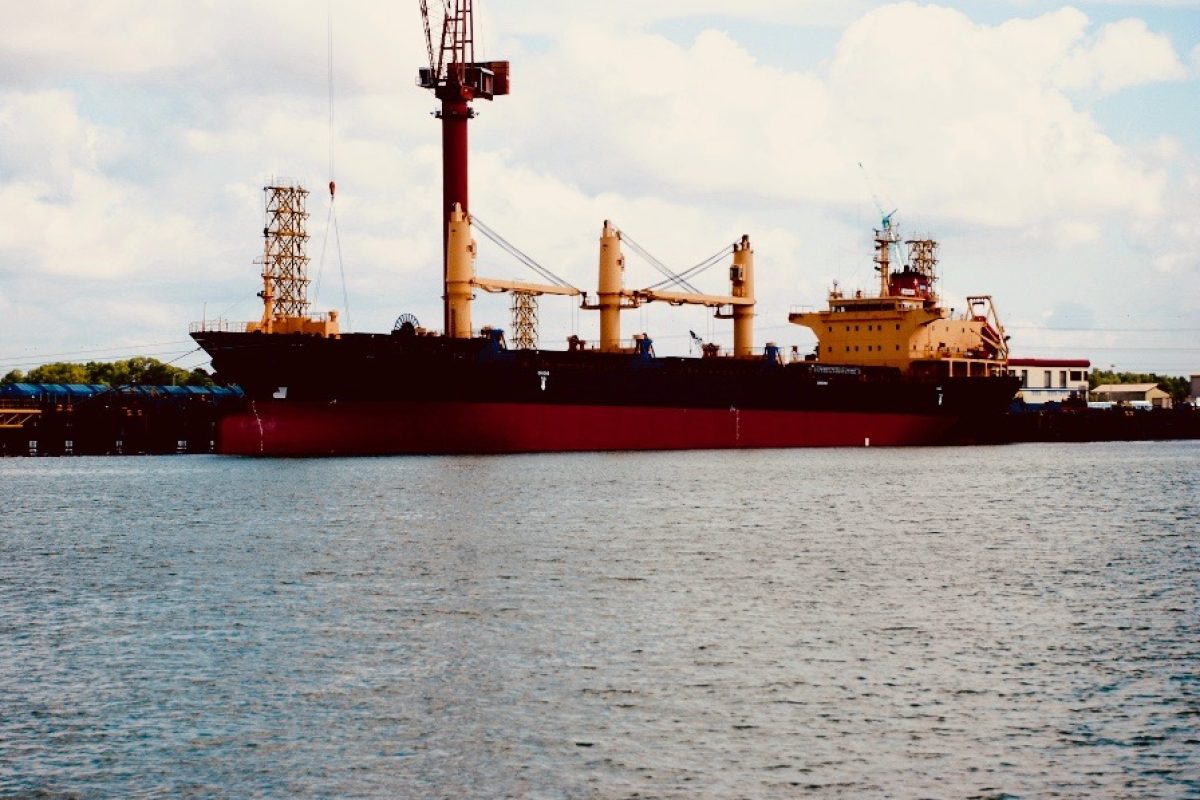 In order to examine the role of relative humidity to the weather and its impact to humans we need to look at how the water vapour is being produced in the atmosphere: 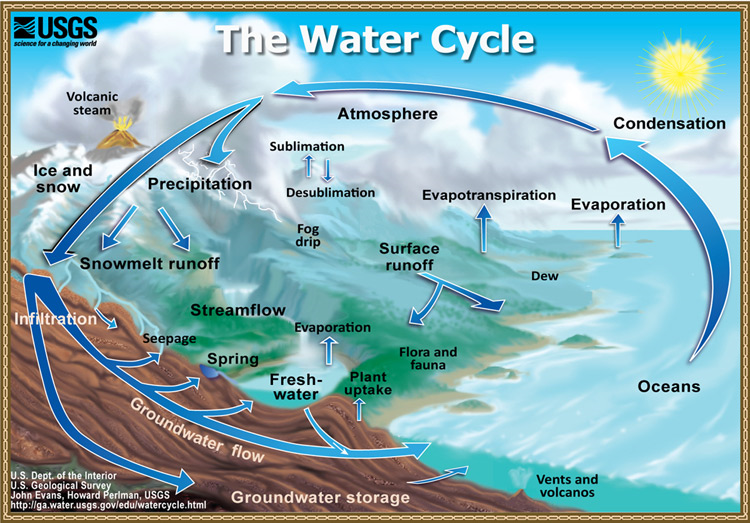 Since the beginning of this world, water has been travelling in a cycle. Water from the oceans and land is transferred to the atmosphere and all the way back again. This is how life is maintained on Earth. The trigger mechanism that forces water to travel is the solar radiation. Solar radiation makes the water from the ocean and land surfaces to evaporate. This procedure turns the water liquid to water vapour and this is how the vapour is added to the atmosphere. Additionally, water(liquid) on the land surface is absorbed by plants and with the process of transpiration, water(vapour) is added to the atmosphere. As vapour moves through the atmosphere, it is cooled and condensed so as to form the clouds. Then rain or snow falling from the clouds lead the water to return back to the Earth and the cycle starts again. 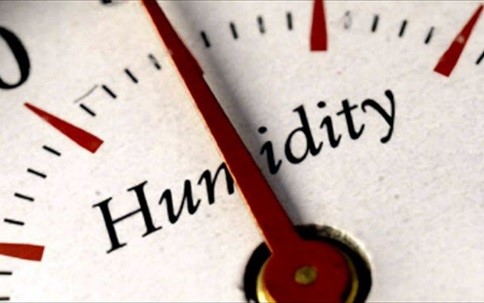 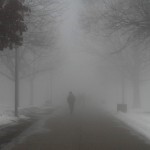 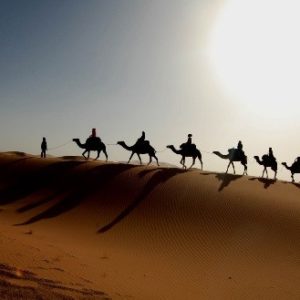 C) HOW HUMANS FEEL THE HIGH AND LOW RHs?

RH plays an important role on how people feel the weather. Our bodies usually remove extra heat by sweating. The process of sweating helps the body to stay cool and maintain its current temperature. High RHs reduce the amount of water that can be evaporated from the skin and thus the body feels hotter than it actually is. This is because the more moisture the air contains, the less moisture can absorb from the skin through perspiration. On the contrary, when the RH is low, we feel same or slightly cooler than the actual temperature because now sweat can be evaporated from the skin.

Air temperature gives an indication of how the weather will be like. Relatively warm or relatively cold. However, bodies feel warmer or cooler than it actually is; depending on humidity as mentioned above. Regarding the cooling effect wind speeds also play a crucial role. The combination of actual air temperature, humidity and wind gives the ‘heat index’ and the ‘wind chill’ respectively. This results in the ‘feels like’ temperature which is an important meteorological parameter to look at when people get information about the weather.

Dew formation is common at nights when the sky is clear. In clear nights and when the winds are light, the Earth emits heat to space in the form of long wave radiation. This results in the gradual decrease of the Earth’s surface temperature. As the surface of the Earth cools down, so does the lowest layer of the atmosphere which is near the ground. Therefore, the water vapour molecules that are close to the ground are condensed when they reach contact with the cold ground surfaces as well as with other cool surfaces like car glasses. This procedure attracts other water vapour molecules for further condensation and the result is the formation of the water droplets. This moisture, we sometimes notice on the roads and cars early in the mornings, is what we call DEW.

Dew point or better dew point temperature is the temperature to which the air with a certain amount of water vapour should be cooled under constant pressure so as the air becomes saturated. In other words, it is the temperature at which we can achieve air saturation which means air relative humidity at 100%.

NO, not at all. Neither the increase, nor the decrease of the air temperature affects the dew point temperature. Why is that? Let’s have a look at the example below.

The conclusion from this, is that there is a relation between both air temperature and the RH with the dew point! See now below!

What about dew point then??

In order to reduce the dew point temperature and consequently the chances of vapour saturation inside a room, we should reduce the absolute humidity values. This can be achieved by reducing the production of water vapour inside the room which can be done by proper ventilating. 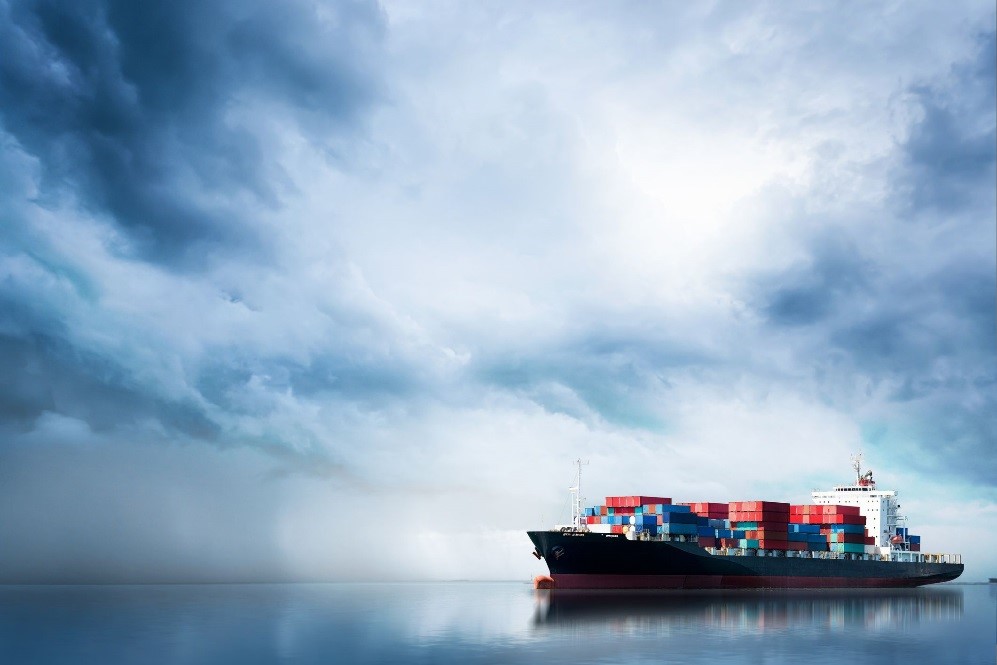 Ships travel long distances at sea where the air is usually humid and can also change climates such as moving from a warm tropical zone to a cold winter zone. These changes can lead to cargo sweat especially when the cargo contains hygroscopic material. Even though hygroscopic products are more in danger, the non-hygroscopic ones such as steel; or products that are packed in hygroscopic material such as wood or paper can also be harmed when exposed to excess moisture.

A) WHAT IS CARGO AND SHIP’S SWEAT?

Vessels that carry hygroscopic products, such as sugar, cotton, coffee, cocoa etc have a natural moisture inside them. When excessive moisture occurs, this can lead to cargo damage resulting in mildew or rot. Cargo sweat happens when warm, moist air penetrates into a hold and condenses on the exposed surfaces of colder cargo.

There is also another term called ship’s sweat. This is the condensation of the moist, warm air inside a hold on the vessel’s structure when the vessel moves to colder climates. This can again cause damage to the cargo as overhead drips might develop and condensed water comes in contact with the ship’s side or bottom of the hold where the cargo is located.

The damaged cargo can be rejected from the receivers at the end of the passage leading to cargo claims due to ‘moisture damage’. 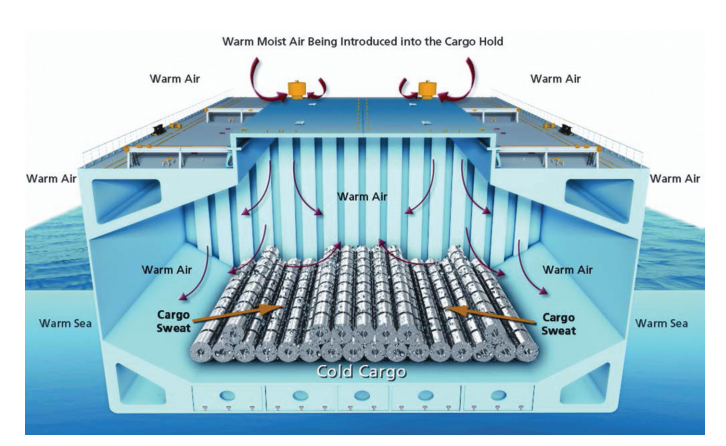 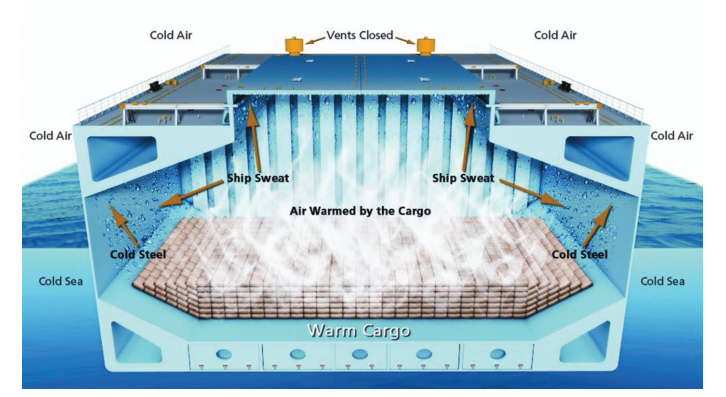 In general, the air always contains some amount of moisture and it is never totally dry. On the other hand, air is rarely saturated except long periods of rain or fog. So the amount of water that air can hold depends on the prevailing conditions. Air temperature at the deck will generally have a relative humidity of 80% or more when the ship is over the open ocean.

Dew Point temperature is also an important element, apart from relative humidity, when considering levels of moisture at a vessel.

But WHEN SHOULD VENTILATION TAKE PLACE? 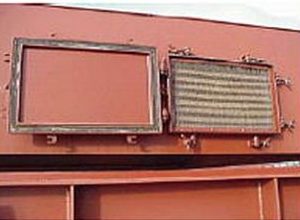 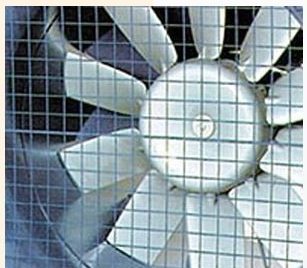 Now that we have the measurements we need to check:

Sometimes the accuracy of the dew point temperature inside the hold is ambiguous. In such cases we can compare the average temperature of the cargo at the time of loading with the outside air temperature.

DO NOT VENTILATE if the dry bulb temperature of the air is less than 3 degrees cooler (<3o) than the cargo temperature.

It’s also important to note that if the vessel travels from hot climates to cold climates then the cargo that contains hygroscopic products needs ventilation while on the other hand not.

HOWEVER, in heavy weather situations, when rain and sea spray can spread into the vessel, precaution measures should be taken in order to avoid rain and spray entering the hold where the cargo is kept. In such circumstances, ventilation should be suspended until weather improves.

Last but not least, it’s important not to forget the ventilation during the night when air temperatures are lower so ship sweat is more likely than during the day.