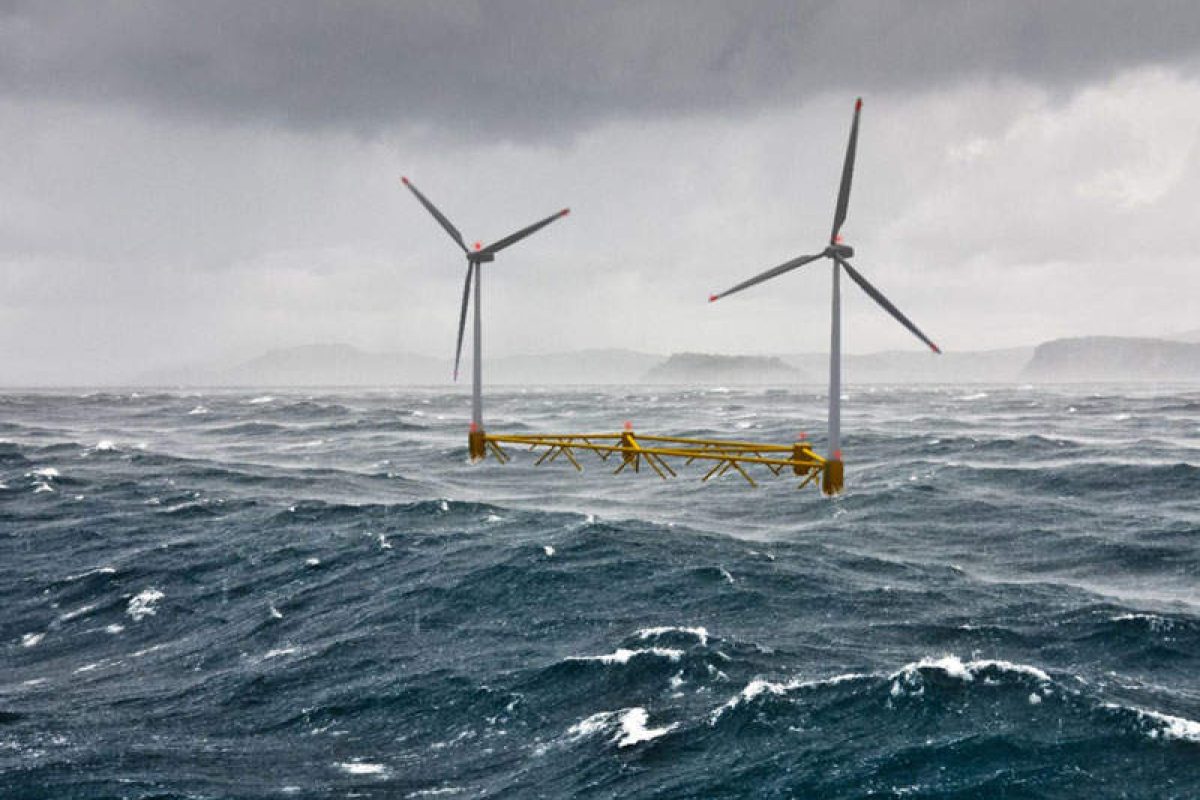 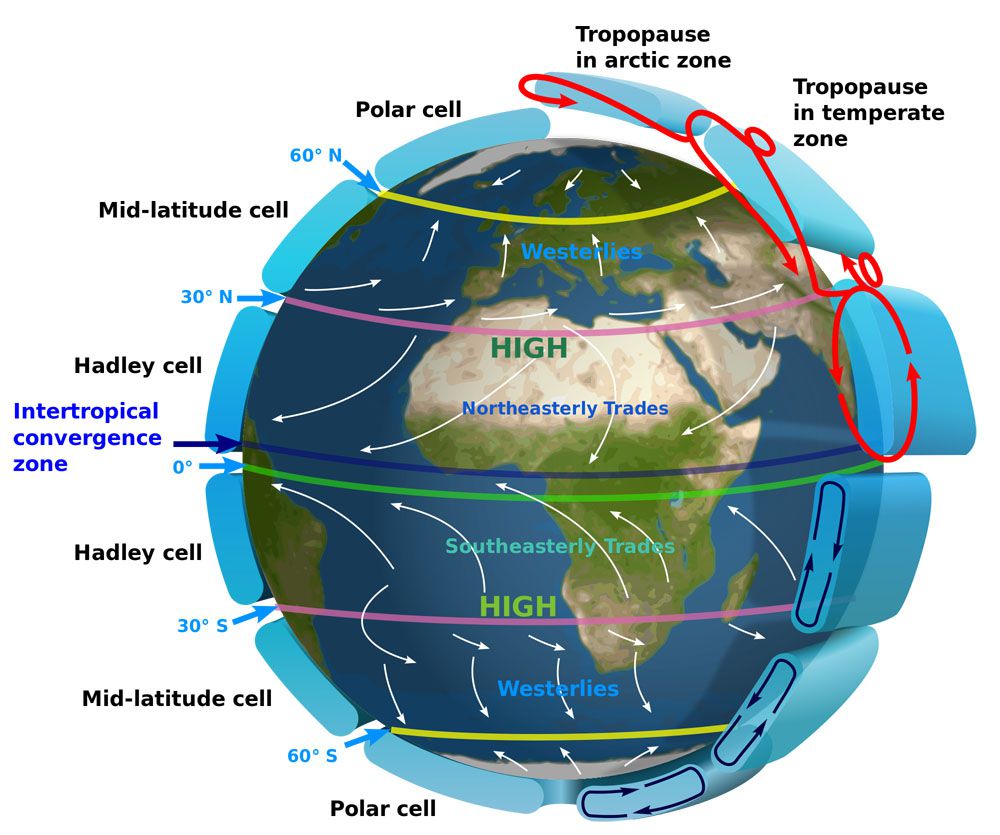 Winds that blow over the Earth’s surface may be classified into five main categories:

The sun heats differently the Earth’s surface as mentioned earlier. The sun rays heat the poles in a more slanted angle than they heat the equator. Equator then becomes hotter than the poles and air masses rise (leading to low pressure) at the equator whereas air masses sink above the poles as they are colder(leading to high pressure). This difference in pressure leads to global wind circulation as cold polar air moves south to replace the equatorial rising warm air. However, this circulation becomes more complicated due to Earth’s rotation and associated Coriolis effect. The Coriolis effect means that air does not flow from high to low pressure directly but it is deflected to the right in the N. hemisphere and to the left in the S. hemisphere. 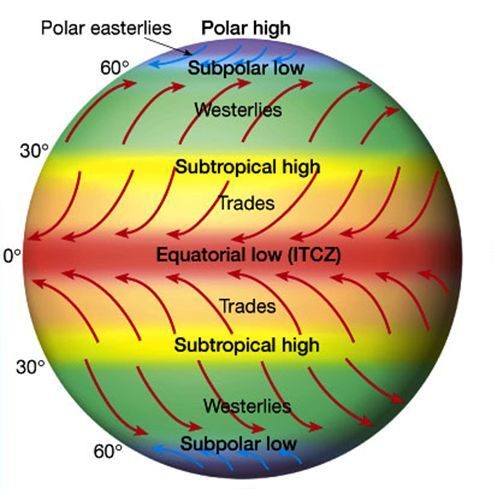 Trade winds are northeasterly winds in the tropics for the northern hemisphere and southeasterly winds for the southern hemisphere. The transfer of solar energy is more evident north and south of the equator at what is called ‘Hadley cell’.  At the equator the hot air contains quite huge amount of water vapor and as it rises through higher latitudes, it forms clouds and subsequently precipitation. This is why in the tropics we see lots of rain. As the air rises further it cools down and becomes dry and dense. This results in air sinking at around 300 N and S respectively creating a high pressure area. The sinking air towards the equator is what we call trade winds which due to Coriolis effect it blows from a northeasterly direction in the N. hemisphere.

The trade winds from both hemispheres converge at the intertropical convergence zone (ITCZ) located at 00 latitude. When the trade winds converge, the air rises to form clouds.

Trade winds are generally very predictable. They are associated with the history of trade. Ships relied on trade winds to establish quick and reliable routes across the Atlantic and Pacific Oceans. Even today, shipping depends on trade winds and the ocean currents they drive.

Near the poles, each airmass creates a region of high pressure. As the polar air is cold, it sinks so it moves towards the equator. This air blows from the northeast to the southwest. These winds are called polar easterlies.

As the polar easterlies move towards the equator, they warm up and become less dense. This leads, at about 60O N, part of this air to rise back towards the North Pole at high altitude creating an area of low pressure. This circulation is called the polar cell. Similar to the Hadley cell, the wind circulation is driven due to the pressure difference between the pole and the 60o N latitude.

The westerlies are the prevailing winds at mid latitudes which occur at the Ferrel or Mid-latitude cell. This is between 30o N and 60oN and 30o S and 60oS respectively. The Ferrel cell is between Hadley and polar cell and can be referred as an atmospheric gear between these two cells.

At 60oN (the southern boundary of polar cell) the warm air rises. The cool air at 30o N (the northern boundary of Hadley cell) sinks. Part of the air at the boundaries continue its way and another part returns back to where it started.  In the northern hemisphere the surface winds at the Ferrel cell blow from the southwest to the northeast and in the southern hemisphere from the northwest to the southeast and that’s the reason why they are called prevailing westerlies.

The westerlies make a significant impact on ocean currents, especially in the southern hemisphere. The strong Antarctic Circumpolar Current (ACC or West Wind Drift) is driven by the westerlies and can travel around the continent (from west to east) at about 4kph (2.5mph). 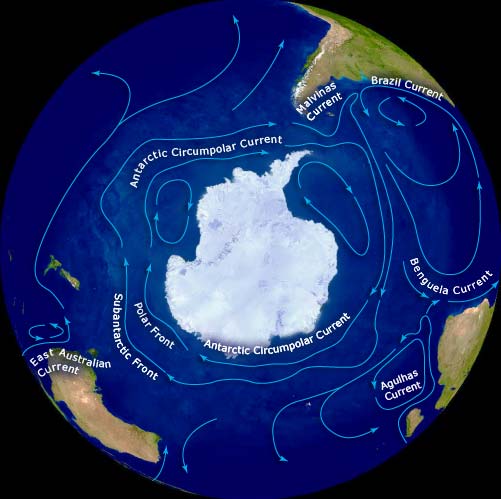 The ACC is the largest ocean current in the world and extremely significant for carrying volumes of cold water and nutrients to the ocean leading to healthy marine ecosystems.

The global atmospheric circulation looks simple but it is not. It is actually more complex than the three-model cell as it depends on water-land heating/cooling variations in both hemispheres. The water and land areas in northern and southern hemisphere are different and the low/high pressure systems change dramatically with the seasons. This has an impact in global circulation and subsequently in forecasting. 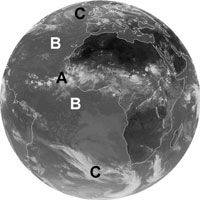 The above infrared (IR) image from METEOSAT shows how the global cloud patterns are formed by the prevailing winds. The Inter-Tropical Convergenze Zone (ITCZ) is marked by a belt of tall clouds (A) near the equator. On either side of this, are the clearer skies of the subtropics (B), and closer to the poles on each side, the region of the Westerlies (C) where cloud cover is more variable. In this thermal infrared image, cold regions are bright, and warm regions are dark.

During the day, when the weather is fair and calm, the land is heated up more quickly than the sea. This happens as the sea has larger heat capacity than the land and it is deeply penetrable by the solar rays. Therefore, 2-3hrs after sunrise, the land surface temperature rises and so does the air above it by the process of conduction. As the air gets warmer, it becomes less dense and rises through the atmosphere resulting in decrease in pressure over the land. The air above the sea has now higher pressure than over the land and this pressure difference creates a wind that flows from the sea towards the land.

This wind is called sea breeze.

A monsoon is a seasonal change in wind direction over a region. There are two types of monsoons, winter and summer ones. They both occur once in a year and are part of the climate of Southeast Asia, Australia and southwest of N. America.

The monsoon happens due to the difference in heating between land and ocean, similar to sea breeze.

Comparing the two, the summer monsoon of course is more important than the winter one as it brings water to generally arid regions. However, sometimes it can turn to a quite intense weather phenomenon resulting in floods and destructions. 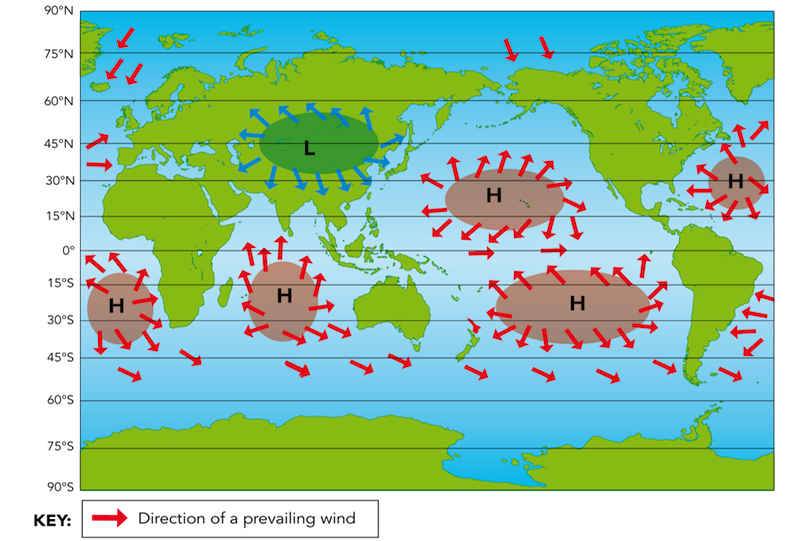 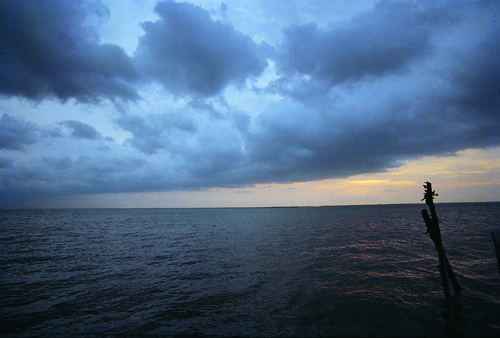 Vessels that travel during the summer months at the Aegean Sea, they might have experienced quite high seas with gale force winds. Why and how can this happen in summer when we all expect smooth and calm waters in such a narrow and confined area?

Meltemia are seasonal winds that blow in the Aegean Sea mainly during the summer months. They named after a turkish word (‘meltem’) which means ‘seasonal wind’. ‘Meltem’ also took its name from an italian phrase (‘Mal tempo’), which means ‘bad weather’. Ancient Greeks called these winds ‘Etesians’ deriving from the word ‘etesia’ meaning ‘annual’.

Their speed varies between 20 and 55kph. However, in the open seas their speed can exceed 75kph or the Force 8 in the beaufort scale and so they can easily become gale force winds and ships can experience rolling and pitching. 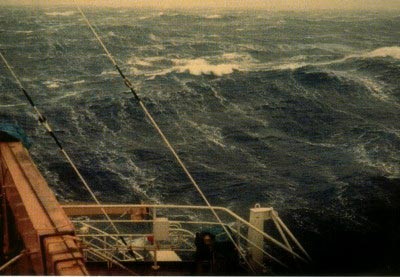 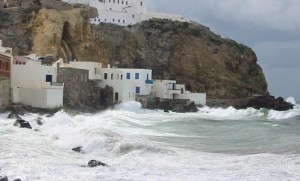 N or NE in the Northeastern and central Aegean Sea

How do they form?

During summer months hot air masses in India ascend through the atmosphere. This ascending air creates a barometric low pressure system over India which extends towards Turkey and Cyprus. On the other hand the stable barometric high pressure system over Azores extends towards Europe and particularly towards Balcans. This combination of high pressure in the northwest and low pressure in the south east leads to meltemia to be established as it can be seen in the picture below. This big difference in pressures (high in the north west, low in the south east),  can make meltemia reach really high wind speeds over the Aegean sea as mentioned earlier. 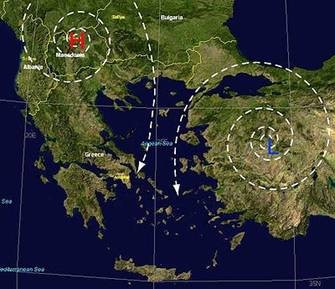 So don’t be surprised when you travel across the Aegean in summer and you get caught in windy waves!

Meltemia blow every summer in the Aegean for 2500 summers now!! This type of wind is one of the most stable wind in the world!!!  However, nowadays meltemia are likely to become extinct due to climate change. This means that their duration, intensity and possibly the places they blow are due to change in the coming years!

All the above mentioned type of winds are apparent to vessels travelling around the world and of course there are more. Getting to know what winds you can expect in which area might be useful to be prepared accordingly.